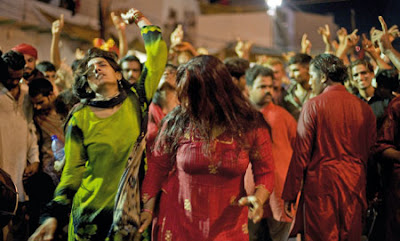 Every year, The Economist magazine prints a delightful ‘special holiday double issue” around Christmas. It is filled with unfailingly interesting essays on an amazingly wide array of subjects. This year’s piece de resistance is the essay on South Asian Sufi Islam titled “Of Saints and Sinners”.

The essay is a wonderfully reported depiction of popular Islam as practiced by the millions of devotees of Sufi saints whose tombs and shrines are dotted all across India and Pakistan. These adherents range from the more serious-minded who seek self knowledge as a path to knowing God through contemplation, meditation and Quranic recitations to the far more numerous who flock to these shrines to beseech the saints to answer their prayers, leave offerings of gratitude and to celebrate the popular festivals centered around the urs (death anniversary) of their respective saint. An urs is a festive celebration because the word literally means wedding night to signify the saint's union with God after death.

The Economist essay is focused in large part on the celebration of the urs of the sufi saint Lal Shahbaz Qalandar in Sehwan Sharif in Sindh, Pakistan where almost a million people congregate for this 3-day event. (2008 was the 734th anniversary of Lal Shahbaz Qalandar's death.) The descriptions of the throngs of devotees, their diversity and tolerance, the ubiquitous scenes of dancing and celebration with non-stop performances of beautiful music and sufi poetry are joyous and heart-warming.

The Economist does not acknowledge it but it would be unfair not to give credit here to Declan Walsh of "The Guardian" who first reported in the Western press on this great gathering in Sehwan Sharif last year and where I first learnt of this incredible festival in rich detail. His two pieces in 2007 called "Devotees go for a whirl at the country's biggest party" and "The greatest party on earth?" are well worth reading. In particular there is a fantastic audio slideshow that I highly recommend. It has several wonderful photographs from the festival and a very traditional qawwali performance at the shrine in the background.

We cannot move on without sampling some music deeply associated with Sehwan and Lal Shahbaz Qalandar. The signature performance honoring Qalandar (also affectionately known as Jhuley Lal because devotees believe that he fulfils the fertility wishes of childless mothers) is "Lal Meri Pat Rakhio Bhala Jhule Lalan". Every major Sufi musician or Qawwal performs this regularly and it is not unusual to end the program with this as a finale as it tends to bring the house down. Here are distinctly different versions of this piece from two of the greatest sufi singers of the last half century. Here is Nusrat Fateh Ali Khan who is in superb form here:

and here is the inimitable Abida Parveen:

There has been a relentless onslaught in Pakistan against this popular and syncretic form of religion for the last 30 years. Since the beginning of the Russo-Afghan war in 1979, the Pakistani military state, Saudi Wahhabi zeal fueled with petrodollars and American cold war myopia all conspired to promote an intolerant and jihadi Islam that has done tremendous damage to the fabric of mostly tolerant South Asian Islam practiced in much of Punjab and Sindh for centuries. Mercifully, it has still survived in very large pockets because it has roots in the people. Yes, it is superstitious but it is also remarkably generous, tolerant and joyful.

Lahore, where I grew up, is a city full of shrines and mausoleums of saints with each of these hundreds of sites tended to by dedicated keepers and visited in large numbers by devotees, particularly for the annual urs celebration. Each saint has their own legend and mythology and locals keep these traditions alive primarily through oral story-telling. Even when you move beyond the large and well known destinations, like the tomb ('mazar') of Data Ganj Baksh Ali Hajveri (the 11th century sufi who is virtually the patron saint of Lahore) or that of Hazrat Mian Mir (the 16th century saint deeply venerated by Jahangir and Shahjehan and whose tomb was constructed by Shahjehan's son, the poet-prince Dara Shikoh), there is an endless stream of people who visit lesser known but no less fascinating shrines of saints whose stories read like something out of Arabian nights.

There is the shrine of Madho Lal Hussain (which is actually two separate people, the Hindu boy Madho and the saint Lal Hussain, who legend has it were inseparable), the site of the annual Mela ChiraghaN (Festival of Lamps) and a place revered by both Hindus and Muslims. There is the remarkable 16th century mazar of the child saint Ghoray Shah (who died when he was 5) and who, it is believed, loved toy horses so a gift of a toy horse from his followers would result in their prayers being answered. This mazar is crowded with people and you can see the many toy horses that devotees continue to bring for Ghoray Shah. There is also Bibi Pak Daman (Chaste Lady), one of the most popular shrines in the city (not far from Queen Mary's College) which is reputed to be the sepulchre of Ruqqaiya or Bibi Haj and her five virgin sisters. Again, according to local legend Bibi Haj was from Hazrat Ali's family and came to the sub-continent in the early 8th century several years after the battle of Karbala. However, the earth opened up and buried her alive after she had been asked to appear in front of the local ruler which the chaste lady did not wish to do. (Historians date this grave instead to the 12th century and surmise that the daughters buried here were those of Syed Ahmed Tokhta Tirmizi). And hundreds of these Shehrzad-like stories go on and on in a muddled but tolerant, rich and captivating mix of religion and superstition.

Good post. Interesting you mention Bibi Pakdaman mazar. Our imambargh in Lahore is located in the vicinity of Bibi Pakdaman where majalis have been held for 60+ years. On shab-e-Ashoor when Shias stay awake and pray, we used to host a caravan of Sunni folks who'd come to "celebrate" at the shrine every year. Incredible co-existence of the two-sects on such a sensitive day -- a tradition that has gone on for decades in our imambargah.

BTW, bibi Ruqayiah was the step-sister of Imam Hussain; sister of Abbas, Imam's half-brother from Imam Ali's second marriage, who was very loyal to Imam Hussain. He was reputed to be very brave and martyred while trying to bring water from Euphrates on Ashoora. His tomb is next to Imam Hussain's and is tilted in deference to him...

Fawad Zakariya
“I have always imagined that Paradise will be a kind of library.” - Jorge Luis Borges Separation of Reason and Religion